Blu has been Adopted!

No further applications will be accepted.

This handsome boy is Blu. Blu is not sporting a muscle shirt (although he is super strong). His unique look can be attributed to Colour Dilution Alopecia (CDA). This is a genetic condition that causes him no discomfort. He has actually had some regrowth since coming into foster care but it is not known if or how much hair will grow back.

Due to his previous aggression/bite history, Blu is NOT be suitable for a home with children. He needs an adult only home with the skills to continue to manage his behaviour. While being in foster he has done well containing his reactions to stressors (eg. clothes, certain handling). He is muzzled during vet visits and nail trimming. Blu must be supervised when meeting new people, new dogs, or encountering new experiences. These things make him nervous. When he shows signs of nervous discomfort, he is easily redirected. This may improve as Blu continues to be exposed to new people, dogs and situations – they will eventually not be new any longer. Alternatively, it may not.

He is nervous about noises, however when ignored or distracted he will calm himself fairly quickly. He has gotten used to many city type noises (cars, trains, snowplow etc). However with banging noises (such as banging on wall, heavy footsteps etc), he paces, shakes and becomes quite nervous and is more difficult to bring down from this state. Currently a thunder shirt and calming treats provide some relief. Also distraction, movement or going for a walk are ways to help him get through these times of stress. Due to his discomfort with certain noises, apartment living is NOT suitable for Blu.

Blu is a huge cuddle-bug who loves snuggling with his human and giving kisses. He is a first class snuggler, and a fantastic kisser! At night he enjoys sleeping under the blanket, however caution should be taken if he will be sharing the human’s bed as unexpected movement will startle Blu and could potentially cause a reaction. Which would then wake up everyone in bed, not just Blu.

Blu is a very active, fun, lovebug. He loves playing with his toys, loves belly rubs (who doesn’t?) and LOVES going for walks. He consistently uses the bathroom outside, with only an occasional accident since arriving in foster care. He travels well in the car in a car seat. He is an amazing and wonderful little guy and you can follow Blu’s antics and overall cuteness on his very own Facebook page. If you are canine savvy, love cuddles, kisses, and walking, Blu may be the perfect fit!

If you would like to adopt Blu, please fill out an adoption application. You can purchase a sweater and/or blanket for him, or any of our other fosters dogs. Please consider becoming a CCRT Sponsorship Angel for any of our fosters by making a cash donation towards their care. 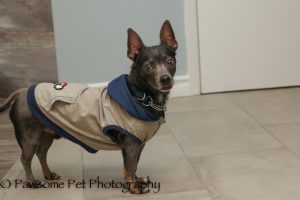 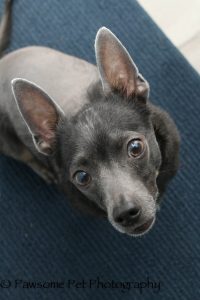 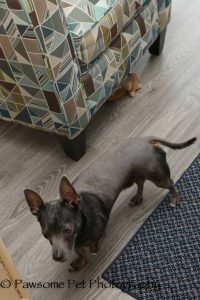 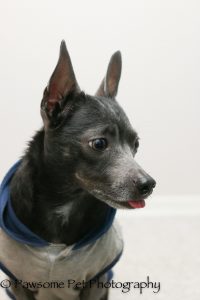