Adorably enormous ears, gentle brown eyes and a five-star snuggler … what more do you need in a dog? If you’re an experienced dog owner with a fenced yard and a patient attitude, Finn might be the guy for you!

Finn was transferred to the CCRT from another Ontario-based rescue. He’s about four and a half years old and would love a forever home to grow, learn and cuddle in!

He’s a sweet boy who loves to shadow his designated human around the house. Finn will bark if he sees someone through the window or hears an unfamiliar noise, so he wouldn’t be the best dog for a condo or apartment home. Finn also suffers from separation anxiety and doesn’t like to be left alone for more than a few hours, so he needs a home where someone is around for most of the day. He’s also a runner, so we’re looking for someone who has a fully-fenced yard to keep this little guy safe.

Finn can be afraid of strangers – particularly men – and will lunge at unfamiliar people, although to date he has never bitten anyone. He takes a while to warm up to people, which is why we’re seeking a patient, experienced home for Finn.

He does his business outside, but he prefers to do it on walks, simultaneously showing off his excellent leash manners. He likes going on walks and is ready anytime you are. He does occasionally have accidents in the house, so would benefit from some patience and training in this area. He loves his food, but will not eat if he is nervous.

Finn recently had some X-rays performed and it was revealed that he has some fusion of vertebrae and narrowing of the spine. While this does not currently cause him any pain, there is a possibility that he may need surgery in the future should his spine continue to deteriorate. There is no way to know for sure whether this will be the case, but potential adopters should be aware that it is a possibility.

Finn also loves car rides and, hilariously, enjoys looking at the drivers in other vehicles. He is good with smaller dogs, but a bit guarded around bigger dogs, likely because of his size. However, Finn has made it clear cats are not his thing and he must be adopted into a cat-free home.

He is quiet at night and prefers to sleep under the covers with his foster mom. He is well-behaved with the home’s resident Chihuahua and he will play with her at times. Finn loves to play with his foster mother and loves playing with his stuffies. He has a lot of energy and likes to be on the move whether it’s just pacing around the house or playing. Once he is tired, he loves to burrow in his blanket and sleep either on his bed or on the couch beside his foster mom.

Because Finn is small and somewhat nervous, we’re seeking a home without either large dogs or children. He has never bitten anyone, but he can be aggressive, especially if his mouth is being touched.

Finn has so much potential and has already made such progress in the time he has been in his foster home. He needs someone who will be patient and loving. He will require training to help him get over his fear of strangers and possible medical care for his spinal disease.

If Finn is the guy for you, please fill out an adoption application. You can purchase a sweater and/or blanket for him, or any of our other fosters dogs. 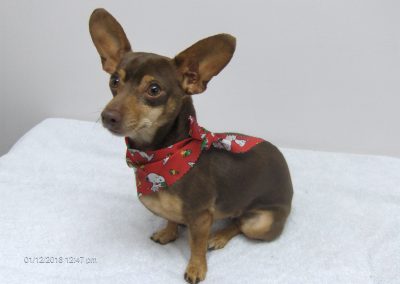 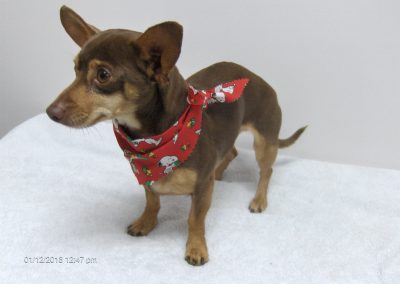 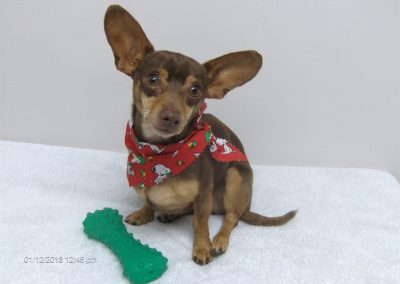 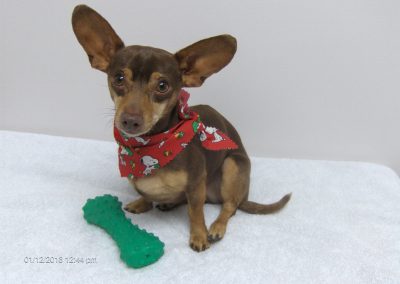 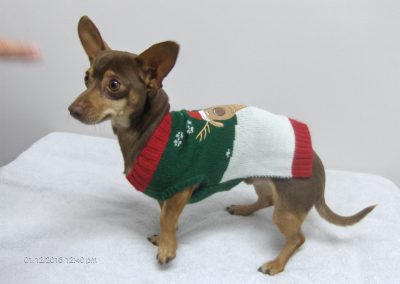 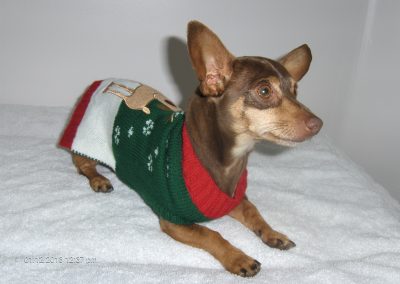 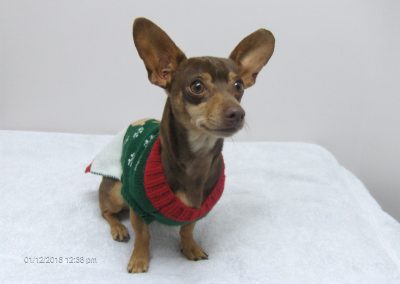 Must join a cat free family