Happy Anniversary to Brooklyn and Theodore!

It’s the first anniversary of Brooklyn and Theodore’s adoption!  I thought I’d send some pictures along to you.  They turned 4 in October and are still very energetic.  They run and wrestle and act like little clowns most of the time.  Brooklyn still loves to make her toys squeek and Theodore still loves to tear them apart.  Theodore used to be nervous around men and he now runs up even to men he doesn’t know, toy in his mouth, tail wagging, wanting to play.  And he’s always nuzzling up to Jake’s face, looking for kisses : ).  With lots of slow gentle exposure and continuing close supervision, they’ve both gone from being terrified of kids to wanting to play with them too.  Brooklyn (still the scavenger) has learned that kids tend to drop and spill a lot of food …

We took them to doggy school where they loved being around the other dogs and learned a lot of things. They were a huge hit with the rest of the class.  Brooklyn prances when she’s on a leash and people couldn’t help but laugh every time Jake took her around the ring.  Theodore’s year-end trick was to bow and to then jump up on my lap and kiss my nose.  I say he stole the show : ).

Ottawa is having a snow storm today.  I’m very happy that we had much better weather last year for the drive out to pick up our babies.

Thank you for your help in getting Theodore and Brooklyn into our home and for all work you do every day. 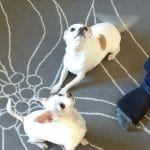 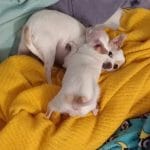 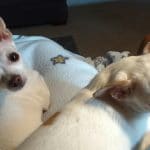