Little Linus has been Adopted!

At this time, we are accepting no more applications!

Linus is ready to find his Forever Home!

Meet Linus! This tiny, dark and handsome little guy is here to steal your heart. 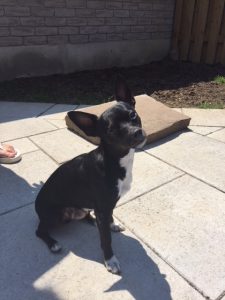 Two-year-old Linus is a sweet and friendly Chihuahua who came into our care when it was determined that his elderly owner could no longer provide him with the necessities. He’s a well-adjusted little dog, but has not been socialized a whole lot, although he has been making progress in that area with his foster family.

He’s old enough to be past the bratty puppy years, yet young enough to share his whole life with a special someone. Are you that someone?

As far as Linus is concerned, there is simply no such thing as too much cuddling, and he’ll let you know that with a quick nudge if he thinks you are slacking off in the cuddle department. Ultimately he’s sweet and full of love, and would snuggle on your lap all day if he could. He’s not super into toys, as he would rather get attention from his human.

This smart and sleek little guy absolutely loves his walks. He even knows what the word “walk” means! He’ll go to the door and let you know if he wants to go out and stretch his legs or needs a pee break. When he first arrived at his foster home, he urinated twice indoors – likely to mark his territory – but with some gentle correction has stopped that entirely. Though he loves a good stroll through the neighbourhood, he’s not a high-energy dog and is just as happy to Netflix and Chill.

Despite his lack of socialization, Linus loves other dogs and tends to be more trusting of people he encounters if they have a dog with them. When a stranger approaches him, he’ll bark a bit to communicate that he’s unsure about them. Sometimes he backs away and continues barking, but he doesn’t bite. As soon as he’s picked up, he stops barking. He’s slow to warm up to visitors in his home and needs a bit of time to adjust. His foster family is working on building his trust in this area.

His experience with children has been limited, but he seems to tolerate them as long as they are gentle. As with any strangers, he will likely need a bit of time to adjust to them.  He also loves cats! He’s had great fun playing with his Chihuahua foster sister, so he would likely be just fine with other pets in the home.

As if his soulful eyes and sleek, dark coat weren’t enough to win you over, Linus has some hilarious quirks. He howls at sirens and is a great watch dog. Burglars? Not with Linus in charge! He also does a funny thing where he scrambles backwards up the base of a tree trunk before going poop.

If you are a patient and understanding individual who is dedicated to helping Linus with some basic training, this sweet lovebug would be happy to meet you!

If you are into Linus, please fill out an adoption application. You can purchase a sweater and/or blanket for him, or any of our other fosters dogs. 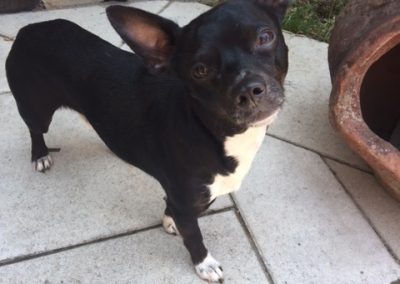 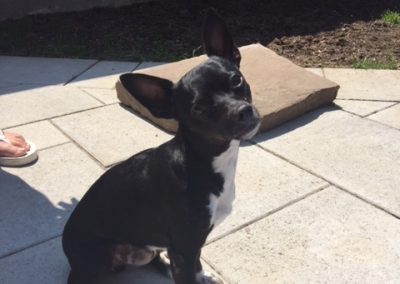 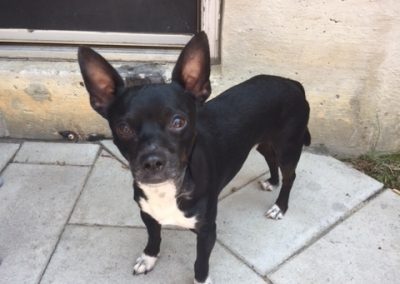 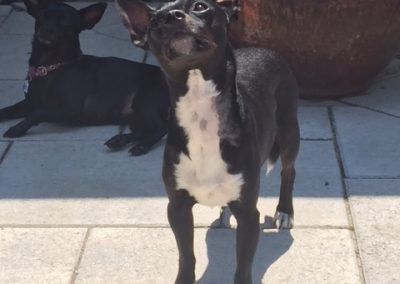 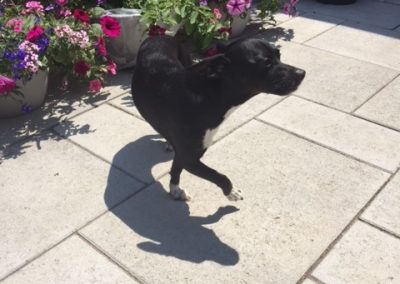 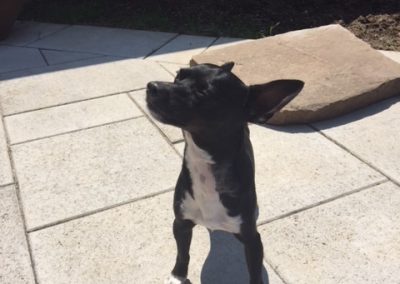 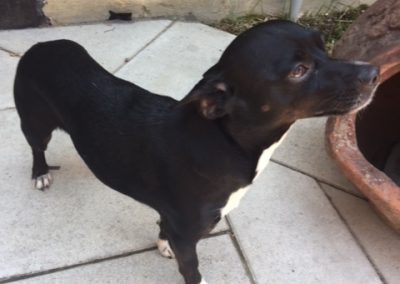