Marco is approximately 7 years old and is the sweetest and cuddliest little guy!  When he was surrendered to CCRT, he was extremely underweight, weighing in under 5 lbs. He is putting on weight nicely and is now up to 5.2 lbs. Marco has allergies and is currently on the Royal Canin Hypoallergenic Hydrolized Protein diet. He absolutely loves it and can’t wait to get his food! Marco currently eats three times per day – breakfast, lunch and dinner. He is so excited to eat every meal that he jumps all over the place and makes little sounds. It’s almost like he’s singing and dancing! His foster parents are working on the ‘wait’ command with him and directing him to a bed to sit in while he waits. He is a very fast learner! Marco loves food so much that he is often curious about his foster parents’ food. He is fed no table food due to his allergies. His allergies have also affected his skin, which has much improved with his new diet and medication. His new family must be mindful of these allergies.

Marco LOVES attention. In fact, he wants all eyes on him all the time. He would be the happiest little dog in the world if his foster parents could hold him 24/7. Of course that can’t happen as they work! But he is always right beside them when they are working. He just wants to be close to his humans all the time. When they leave, Marcobarks. He sits and waits at the door for them to come home. At night, Marco sleeps in their room, but in his own bed (crate). He loves his bed and sleeps through the night.

Marco also loves to play. He likes any type of toy or ball, and will happily run after whatever you throw. Marco loves going for walks. He has a lot of energy and going for walks is one of his favourite activities. Marco also loves spending time outside now that it’s warm. He loves sitting on the front porch and watching everyone go by, and sometimes he lets out a couple woofs! When it’s cold/cool, he does not want to go out at all! However, his foster parents pick him up and place him outside so that he can do his business (he is house-broken).

When meeting new people, Marco is sometimes cautious. He is still learning that people just want to say hi. He lives with a chihuahua foster sister and they are tolerant of each other but don’t play together. However, they have recently started to sleep on the same couch blanket sometimes! Marco has met a few other dogs but is very picky with his canine friends. He has been reactive to several dogs, and will tolerate others. It’s hit and miss and Marco would do well as the only dog in his home because of this.

Marco has healed well from his neuter and still awaits his dental. He is doing very well in his foster home, soaking up the love and cuddles and thoroughly enjoying his humans’ company. 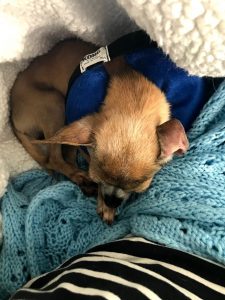 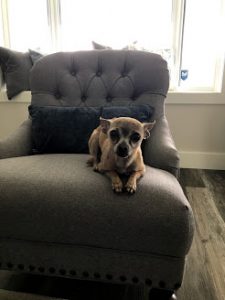 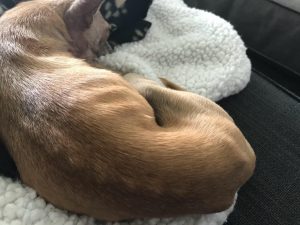