Ti-Gars (“petit garcon” or “little boy”) and Angel are a bonded pair and must be adopted together. Their adoption fee is $750. 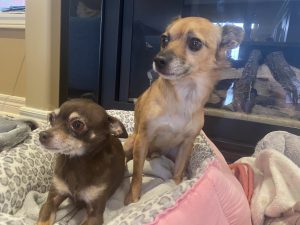 Ti-Gars is 8 years old and weighs in around 10 lbs. He is part chihuahua and part we-don’t-know and all sweetness. His female sidekick Angel is 7 years old and very petite, weighing only about 3 lbs.

Despite a rough start getting here, they are doing just fabulous in their foster home. They were transferred to CCRT via a Quebec shelter, where the change in routine left Angel confused, scared, depressed and unwell. She was not well enough to make the transport with Ti-Gars but thankfully improved enough to be transported the following week. With wonderful TLC in her foster home and with Ti-Gars by her side, she is on her way to living her best life. Both of these sweet souls are total lap dogs.

Their house training is coming along. They are still confused as to the difference between a carpet and a pee pad but the problem is solved with the removal of any carpets in the area they frequent. Ti-Gars goes outside to do his business almost exclusively. The weather has not deterred him thus far. He just goes to the door and stands patiently waiting to be let out. His forever home should have a secured backyard for Ti-Gars to access when needed. He’s a very good natured dog and doesn’t seem to be bothered by much of anything or anyone. He likes strangers and other animals with one exception that we know of. Squirrels. He believes it’s his job to make sure backyards are free from squirrels. Angel, on the other hand, does not like the outdoors. She prefers to stay inside and have two separate pee pads indoors to use, one for #1 and another for #2. She really is a little lady.

Also unlike Ti-Gars, Angel does not like strangers, two-legged nor 4-legged. She stays away from them until she feels comfortable enough to approach. Angel and Ti-Gars’ foster home had a “stranger” come over to complete some work and when he came into the room were Angel happened to be, she barked and went after the bottom hem of his pants. She had to be held until he left. Therefore, Angel must be monitored when she meets new people in her home until she becomes confident that she is still safe. Ti-Gars, on the other hand, was laid back and just went up to the man, smelled him, sat down and watched him work. Other than at the door bell and squirrels, Ti-Gars barks very little.

Angel sees herself as top dog. If she wants something of Ti-Gars, she will take it. If she wants the spot he’s lying in, she will sit on him and either he just makes room for herself or he gets up and leaves. Both Angel and Ti-Gars are fine with the resident cat in their foster home however on occasion, Angel has tried to dominate the cat. If she doesn’t want the cat resting in one of “her” beds, she puts up a barky fuss until the mild-mannered cat leaves. Petite but bossy.

As bossy as Angel behaves with Ti-Gars, she also relies on him for her emotional well being. The running joke in their foster home is that Ti-Gars is Angel’s therapy dog! At night she looks for him very often falling asleep in the same bed with him. Sometimes they sleep separately, on opposite couches, but Angel will not settle until she knows he’s in the same room. Ti-Gars is fine without Angel although when she went in for her spay surgery, Ti-Gars was beyond thrilled when she returned from the vet and he stayed by her side the entire night .

Both dogs have a normal diet and they both eat dry dog kibble. Ti-Gars doubles as a kitchen vacuum cleaner making sure the floor stays free from crumbs and spills. He considers any food that is at his level fair game. He knows he is not allowed to sit on the kitchen chairs but despite this, he will try to sit on a chair if not tucked in under the table if it brings him closer to the goodies.

Ti-Gars takes two pills a day (VETMEDIN); one in the morning and one at dinner time. He’s an easy dog to give pills to by wrapping a treat around the pill. He has a grade 4 heart condition that is stable at this time. He likes to take walks, he takes naps during the day and he loves cuddles any time of day or night. His heart murmur is well controlled on the medication.

Angel is healthy with one hind luxating patella. She should avoid activities that are hard on the knees like jumping off the couch. She has learned to use pet stairs to get on and off the couch. She’s not a fan of the outdoors but when she does take a walk with Ti-Gars she doesn’t go very far. She pretty much prefers being carried and loves sitting in the Muskoka Pouch hoodie watching the world go by while Ti-Gars walk.

These little cuddle-bugs are a pleasure to have around and will make a great addition and add oodles of cuteness to the appropriate home. If you meet the criteria for their new home, please fill out an adoption application. You can purchase a sweater and/or blanket for them, or any of our other foster dogs. 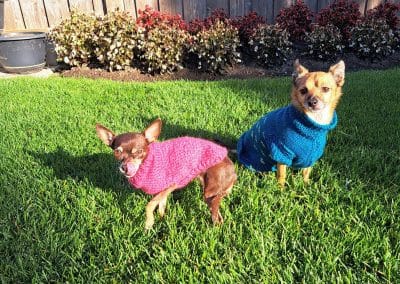 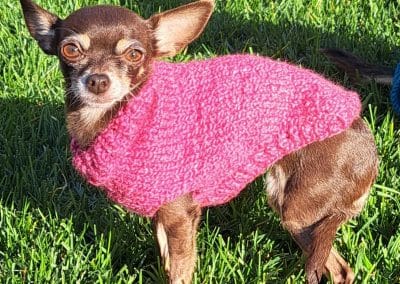 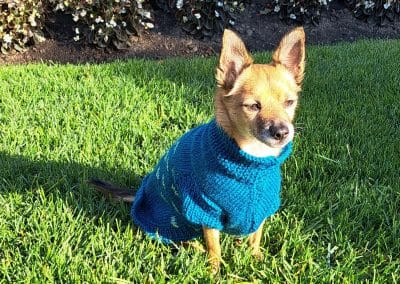 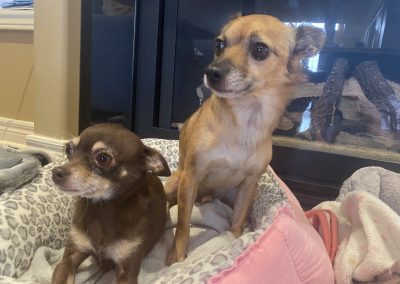 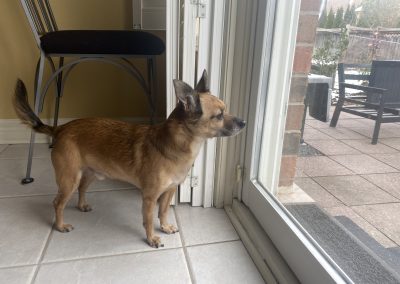 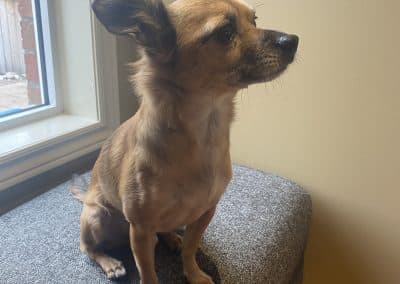 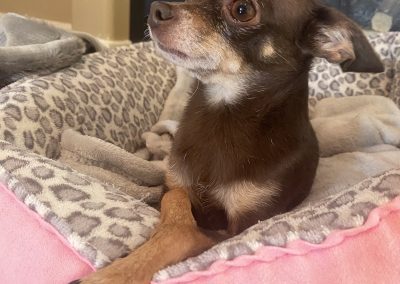 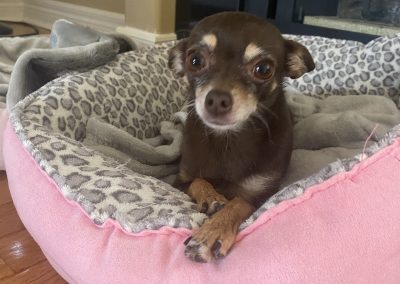